The UK law states that the two front side windows, i.e. the windows either side of the driver’s head, must have a VLT (visable light transmition) of >70%. That means that at least 70% of light must pass through. Most modern car windows are made of glass with a 80-70% VLT, so even a very light film applied to the front windows will take the VLT the wrong side of 70% and therefore will not be legal.

An intrumented check is performed by a suitably trained officer with a ‘TintMan’ VLT meter. These checks are normally from Vosa roadside campaigns.

65%-46% VLT: Advise only – The driver will be advised that the legal requirements have been breached.

45%-30% VLT: Delayed prohibition – The driver will be given a prohibition notice and will usually have 10 days to have the film removed before going to a vosa testing station to have the VLT re-checked.

<30% VLT: Immediate prohibition – The vehicle is considered dangerous and cannot be driven until the film is removed.

Tint Genies provide a quality, efficient and affordable tinting service to customers all over Gloucestershire 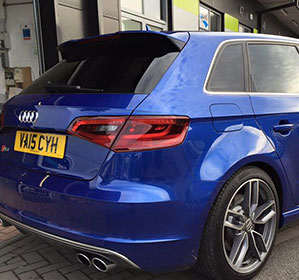